The King of Oblivion

The King of Oblivion is a major character, and the primary antagonist for the majority of the story, Akame

ga Kill: Hazard Requiem. Regarded as a regal, charismatic, and overall terrifying individual, his true name remains unknown, but stands as one of the most terrifying character, seeking to destroy humanity as a whole.

As described by the author, he is a man who has lost all faith in the current order of the world, and is best described by his main theme, "Howling," performed by the Abingdon School Boys.

The King of Oblivion is a terrifying individual, usually seen wearing ebony black armor with a bone-like motif, along with a black cape bearing a high collar. His helmet obscures his entire head, which is outfitted with dragon-like horns. Beneath the helmet is the face of a young man with silver-white hair and cold white eyes. He strangely bears a crack-like vein pattern along the right side of his face.

At the surface, The King of Oblivion is a cold, melancholic, manipulative, and brutal individual, seemingly holding no regard for human life. He shows absolutely no mercy to those who stand against him, killing them outright without a moment's hesitation. When confronted, he displays an apathetic mindset, viewing the world as a disgusting, vile place that holds no worth whatsoever, and refers to humanity as nothing more than "vile, disgusting creatures who are better off as mere corpses."

When Kurokami interacts with him, he is revealed to be a somber, misanthropic person who has lost all faith in the world, and in humanity due to a past event. He claims that humans live only to ruin other lives, including their own. Furthermore, he believes that, when people have the power to change the world, they have two options, either inherit the order of the world, or destroy it. The King considers himself as one such individual, a true monarch who is capable of making that choice.

His belief is that the world is warped and decrepit, and that it should simply be reduced to mere ashes and disappear.

In regards to certain individuals, The King of Oblivion apparently, albeit rarely, acknowledges people for certain traits. Among those he acknowledges are Najenda, whom he shares a history with, and Kurokami, the one person he is unable to ascertain whether or not he is a mere decrepit human.

The King of Oblivion's past is largely unknown, other than that, according to Najenda, he was a member of the Revolutionary Army, though given the context of her words, it is clear is that he is far older than he appears, given that she expressed total shock by age. Due to an unknown event, the King was left with nothing but utter disdain for humans as a whole, and lost all faith in both them, and the world.

At some point in time, he found himself in possession of Stylish, left in a near-dead state. Apparently, the two held some sort of agreement, and hid the King away from the eyes of the Empire, even from his captain, Esdeath. For the next fifteen years, he would remain asleep inside a test tube as the doctor began to repair his body, eventually making him into an artificial Imperial Arm with a consciousness, and with memories of everything that occurred within this time period. It wouldn't be until the appointed time of Kurokami's execution that the King of Oblivion broke free of his constraints, and begin a war unlike any other against all of humanity.

"There is no path. Beyond the scope of light, beyond the reach of dark, what could possibly await us? And yet, we seek it, insatiably so... such is our fate. Such is our nature." (to Kurokami)

"Hmph... what foolishness. What is it that you humans continue to desire? Is it your own destruction? Is it your own avarice? The only thing you are even capable of accomplishing is destroying yourselves... that is all you are. Ignorant, pathetic, disgusting creatures." (to Night Raid and the Jaegers)

"...how curious. I can hardly even read you. Are you a pathetic mongrel, like the rest of them? Or... are you something else entirely?" (to Kurokami)

"Ah... Najenda. How good to see you again. A shame, though... You've grown into a pathetic old fool, just like the rest of them." (to Najenda) 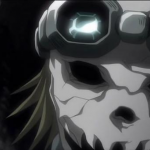