Shadow Armor: Ryos is an Armor-type Teigu that took on the form of two twin black bracelet in its sealed form. When released, it takes the form of black and gray, full-body armor losing the cape that Incursio had and gain two giant raven wings which are usually folded.

Ryos was an Armor-type Teigu created from the flesh of Skiadrum, a Super Class Dragon Danger Beast. Like Incursio, it was a prototype for what would later become Grand Chariot. The Danger Beast's power was so great that its flesh is still alive within, giving the Teigu the title of "Shadow Dragon Armor". In the past, Ryos once belonged to a high-ranking Imperial Army officer and taichi expert Heiden, who was also Patorikku's father, and later came into Patorikku's possession and was used while Patorikku was running from the Imperial Army.

The stance required to activate Ryos in where the user will cross their arms where the key appears and the Danger Beast within will cover its wielder with armor. The Armor it's self grants the ability Morph into weapons around the limb areas (Blade's, Guns etc) or even extend as a spear. Ryos also has the ability to manipulate the shadows. Due to being a full body-armor, Ryos had a near-indestructible defense with the only thing able to pierce it being other Teigu. The armor also greatly enhanced the user's physical abilities such as speed, strength and agility. The users of Ryos were also able to wield a long demon Scythe or a chained Scythe weapon called "Ryujin" which was capable of cutting through Danger Beasts with ease.

The first form of Ryos is a simple black skintight long sleeves shirt and loose green pants with two short clever swords. A long face mask covers his lower face and neck. The second more armored form of Ryos it is a full body black armor that is covered by a black cloak that is wore as a hood and flows down like an cape. The cloak holds multiple small kunai knives in on the front and shadow like spikes on the lift side of the shoulder. The gauntlets has black spikes coming out of it's wrist and the gauntlets also has a short hidden blade hidden under it wrist.

Shadow Form : The user transforms their body into a shadow, granting them the ability to move around surfaces. The user can transition in and out of this form as they please.

Knuckle Shadow : The user shapes their shadow into a fist to punch the opponent upwards. Multiple fists can also be created as well.

Guard Shadow : The user uses their shadow to create a shadow dome that protects them from incoming attacks

Shadow Orochi : The user shapes their shadow into multiple snakes to attack and bite their opponent.

Shadow Pull : The user creates a shadow in the shape of a giant hand that can travel over large distances to retrieve targets and bring them back to the user. The target is pulled into the shadow, and then brought back to the user.

The Trump Card of this Armor is the Shadow Cannon Ability the user configures all of the armor onto a single limb to take the form of a huge cannon that launches a ball of shadow energy in the form of a very powerful beam. This move has Been dubbed Shadow Cannon. 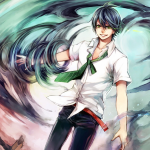