King of Dragons: Reborn is a Teigu/Human who now serves as the second command of the New Jaegers under Lucy's Rule who he also serves as Lucy's Imperial Arm but also posses his own Teigu.

Reborn is a Teigu but is half human therefore he still has a human heart and brain but no core. Reborn has spiky black-colored hair. He has dark blue eyes, and his body is toned and muscular. It's safe to say Reborn is in his early twenties being physically youthful. Reborn wears a long black blue with a coat over, with black pants and boots. Reborn is shown to have a scar on his forehead that is cover by his hair and a scar located in his waist. Reborn is always seen wearing a sliver chain necklace with a sword on the end and chained wrist on his right wrist. But his most prominent features are the black marks on his body going down his right side. He also has a tattoo on his on the left side of his chest.

Reborn is generally a nice person he is kind to others and puts others before himself. Reborn also has a habit of being the silent type always listening and following orders to the fullest when Lucy gives it to him. Reborn is also shown to be over protective of Lucy and is always by her side no matter the cost. But at times the power of the Dragon inside

Reborn makes him too prideful and could make him face challenges that are best to leave be (this happens because dragons generally are creatures who are born to dominate and be supreme so at times Reborn feels that side and has to sustain it). But also if Lucy is in danger or even threatened  Reborn losses his cool and snaps at anyway who dare would hurt her. Despite all that Reborn is a respected member of New Jaegers and is loved by all as a older brother figure.

Reborn grew up with his just his father, who was known to be a world class hunter of danger beasts and had his own Imperial Arm which could control fire called "Flame Manipulation". Reborn looked up to his father as

a role model and felt pressure being the only son of a gifted legend, so he worked hard and he was living up to his father's legacy as he trained everyday. But right before Reborn turned 15 his town was attack by a Ultra Mega Class Danger Beast, The King of Dragons Ragnarok. Reborn couldn't move he was scared but his father touched his head and went to fight the beast only to be killed after a long fought battle as Reborn ran to the beast as the Dragon just stared at Reborn and stated that Reborn would become a legend who killed a dragon as the beast ran off as Reborn went to his dying father as Reborn saw his father touching Reborn's chest as he gives Reborn his fire powers as he says go find the dragon and kill him as his father dies hugging Reborn. So Reborn went and chase after the dragon and found it eventually as he fought the king of Dragons with his new found power sand after a long gruesome battle he slayed the dragon but, Reborn by mistake swallowed its blood and the Dragon powers and soul went into Reborn causing his black marks to occur as Reborn felt his body changing as he had became a second Imperial Arm which he called "Dragon Manifestation" as he became a Tegiu himself while also being half human since he had no core but he couldn't unlock his powers somehow. Soon after Reborn for 7 years trained and mourned his father's death and decided to become solider of the Empire. On a mission he met a girl named Lucy who he saved and escorted back to the empire tapped into Reborn and unlocked his Dragon powers becoming Lucy's Imperial Arm. This stunned them as Reborn bowed to Lucy saying he will do his best to protect her. With Reborn now serving Lucy he became the new Dragon King using his Dragon Powers and his fire powers which earned him a spot on the New Jaegers and throughout the years he become of the strongest Fighters in the Country.

(I am busy so I will make correction to my history when I have time I had to rush so sorry if its a bit confusing, its still under editing for now so is my power section so i again apologize)

Reborn is a skilled Fighter and might be one of the strongest in the Country even so that doesn't mean he is unbeatable:

Dragon Manifestation: Reborn has gained the physical properties of a Dragon being his blood and soul and so he can fight like, also do to him being the King of Dragons he is in control of them. But despite being a Teigu and not having a core Reborn can not self regenerate and heals like a normal human. But he cannot use his Dragon Powers if Lucy doesn't allow it.

Fire Manipulation: Reborn also has the control of Fire being able to burn anything to ashes and is immune to any heat based attack literally able to turn himself into a flame.

Enhanced Strength and Stamina: Reborn has trained all his life and has the strength and stamina far beyond a normal human he can lift up a house with one hand with ease and can take beating and still get up with a smile.

Pyro Rebirth!: Inferno Dragon God Wrath!:  Reborn is able to with the Energy of Lucy is able to fuse himself with his Fire and Dragon god powers to create Wrath the Dragon God of Infernos. 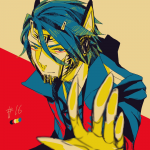